Posted on December 5, 2014 by bolshevikpunk

General Patton and Bradley at the Ohdruf Concentration Camp in April 1945.

General Patton, along with the Dulles Brothers, the Bushes, and other capitalists throughout the United States, held not contempt, but adoration towards the Nazi’s. Patton literally put former Nazi POW’s in charge of formerly imprisoned Holocaust survivors, seeing them as the most “competent” to overlook the former prisoners in similar conditions. 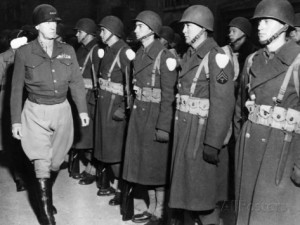 “It’s a remarkable saga and a fairly shameful period in postwar history. We sort of think of the concentration camps, you know, being liberated at Dachau, at Bergen-Belsen, at Auschwitz, by the U.S. and Britain and Russia. But liberation for the survivors who were left in the camps meant staying in those same camps, behind barb wire, under armed guard. And remarkably, sometimes they were supervised by the same Nazis who had lorded over them when the Germans were still in charge.

And there was a report to Truman from the dean of the University of Pennsylvania Law School, a guy named Earl Harrison, that compared the camps to the Nazi concentration camps, except that, Harrison wrote, the only difference is we’re not exterminating the Jews. And General Patton, who ran the camps as the supreme Allied commander for the United States after the war, was furious when he read Harrison’s findings to Truman. And he wrote in his own journal—and I looked at these. I found the remarks so troubling and so jarring, I thought maybe at first they were a forgery, but it turned out to be true. He wrote in his own journal that what Harrison doesn’t understand, he thinks that the displaced persons in the camps are human, and they’re not. The Jews, he wrote—this is General Patton speaking—are worse than human, they’re locusts, and they have no respect for human dignity. And he recounted taking General Eisenhower, soon to be President Eisenhower, on a tour of the displaced person camps, and he said that Eisenhower didn’t really understand how loathsome the displaced persons were, and he thinks that they have some human dignity, when really they don’t.

Patton, it turns out, was not only a virulent anti-Semite, but also held the Germans in a weird sort of place of respect. I also tell the story in the book about, in those displaced person camps, Patton went to the holding cells for the German POWs, the German scientists, and he sought out one in particular, General Walter Dornberger, who oversaw the production of Hitler’s V-2 rockets, which had been phenomenally successful and destructive in bombing London and Antwerp. And Patton brings him out of the cell and says, “Are you Dornberger? Are you the guy who ran the V-2 program?” And Dornberger said to him, “Jawohl, Herr General.” And Patton pulled out three cigars from his pocket and handed them to the Nazi general and said, “Well, congratulations. We couldn’t have done it.” And it sort of epitomized this attitude that he had towards the Nazis. He even defied an order from Eisenhower at one point, General Eisenhower, and maintained the Nazis as supervisors in the DP camps, because he saw them as the most competent group that the Allieds had.” – Eric Lichtblau on “The Nazis Next Door: How America Became a Safe Haven for Hitler’s Men”